Promoting Competition in Innovation Through Merger Control in the ICT Sector: A Comparative and Interdisciplinary Study (Munich Studies on Innovation and Competition Book 10) por Kalpana Tyagi 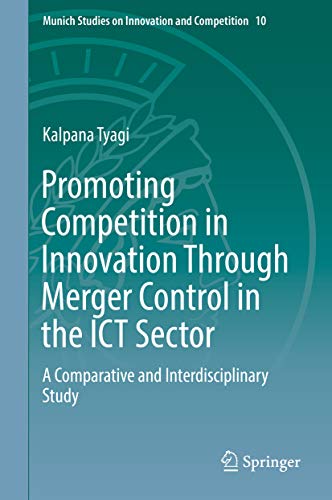 Kalpana Tyagi con Promoting Competition in Innovation Through Merger Control in the ICT Sector: A Comparative and Interdisciplinary Study (Munich Studies on Innovation and Competition Book 10)

This book addresses the question of how competition authorities assess mergers in the Information Communication Technology (ICT) sector so as to promote competition in innovation. A closer look at the question reveals that it is far more complex and difficult to answer for the ICT, telecommunications and multi-sided platform (MSP) economy than for more traditional sectors of the economy. This has led many scholars to re-think and question whether the current merger control framework is suitable for the ICT sector, which is often also referred to as the new economy. The book pursues an interdisciplinary approach combining insights from law, economics and corporate strategy. Further, it has a comparative dimension, as it discusses the practices of the US, the EU and, wherever relevant, of other competition authorities from around the globe. Considering that the research was conducted in the EU, the practices of the European Commission remain a key aspect of the content.Considering its normative dimension, the book concentrates on the substantive aspects of merger control. To facilitate a better understanding of the most important points, the book also offers a brief overview of the procedural aspects of merger control in the EU, the US and the UK, and discusses recent amendments to Austrian and German law regarding the notification threshold. Given its scope, the book offers an invaluable guide for competition law scholars, practitioners in the field, and competition authorities worldwide.